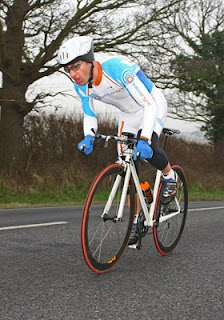 Simon Gooderham (http://good.zenfolio.com/) took this pic of PK at the Maldon hilly. Was at the top of a 1 in 8 climb just before the finish. Hence the expression!
Posted by Team Salesengine.co.uk No comments: 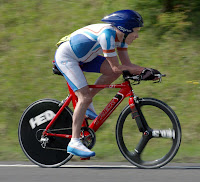 Dave Wentworth recording a 23:48 in the Cambridge 10 for his first competitive event in Team salesengine.co.uk colours. As usual on the F2/10 "that wind" was blowing down the course.
Posted by dw-salesengine No comments: 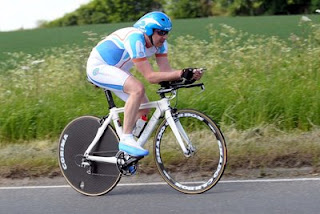 Nice photo taken at the victoria CC by Sportinpictures.com Time to lose a bit of weight though!

I've got a sort of love/hate relationship with the E1. It always feels like a really safe course to ride and there are some cracking points where there are walls on both sides and the noise of the disk reverberates around you which is cool. Problem is that it is so damn hard as well.

I was the only representative of the team on the start sheet today as Paul's entry got there too late, but he came out and rode a private time trial after the last man had gone to get some racing in his legs.

It was a tailwind out and the course drops steadily to the turn and I got there in 11:10 and then it was a major battle into the teeth of the wind on the way back. Finished with 25:59 which was dead on the same time that PK managed according to his clock, but as he didn't have a number on his back the moral victory probably has to go to him!

Winner was Richard O'Rourke in a faintly ridiculous 21:44 and only one other guy went inside a 23. Waiting on final results to find out the placings, but overall am happy with the ride.

Time to focus now to prepare for the Team Spirit 10 next Sunday as we have 3 of us riding and it should be a good battle to see who is quickest!