A deceptively hard day on the F1/25 on Sunday morning for Dave Wentworth. Very little wind to start with so fairly even both ways, but then it really blew-up to quite a strong headwind for the final 10miles southbound from Buckden. At 22.5 miles Dave was still averaging 25.5mph, alas, that last 2.5 miles took it's toll and Dave finished with a 1:00:50.
Posted by dw-salesengine No comments:

The E2 is reputedly one of the fastest 25 courses in the country, so Steve Robinson had high expectations of a good ride leading up to this Saturday morning event.

On the day the wind was slightly stronger than the forecasters had predicted and it took the edge off the times. Steve missed breaking the magical hour barrier but still recorded his fastest time for 9 years with a 1:01:16.
Posted by Team Salesengine.co.uk No comments:

Paul King and Steve Robinson were competing in the West London 50 at Newbury at the weekend. Conditions were cold and blustery which made for a challenging event.

Paul was absolutely on fire, his time of 2:11:40 taking him to 27th place. Considering the hard conditions the fact that he got within almost a minute of his PB says it all.

Steve meanwhile didn't fare so well after choosing a disasterous pacing strategy. Aiming to ride at 25 pace and hang on proved too much and at 33 miles he called it a day.
Posted by Team Salesengine.co.uk No comments:

Dave Wentworth was in action at the 10mile distance on Saturday in the Team Economic 10miler on the E2/10 course. Another tough hard wind start saw Dave recording a slow 12:45 to the turn. First objective of the ride had already been missed by this point - he was caught by minute man (just) before half -way. Stopped to a stand-still on the roundabout turn. A very fast return leg - again - saw Dave recording a 10:02 for a finish time of 22:52. Aargh, just a single second short of his current PB for the 10mile event - maybe that hold-up at the turn really did cost Dave a PB?! Most riders were indicating a hard day with times well short of their PBs - so to be just a second short of a PB and his fifth fastest ever leaves Dave well chuffed.
Posted by dw-salesengine No comments:

Photos from the National championships 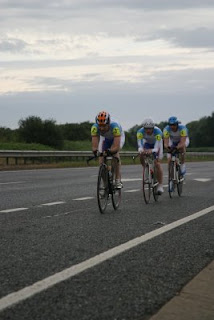 22nd in the National championships!

OK, so let's not look at how many teams completed the course, better to just focus on a cracking ride by the team.

Having lulled Graeme into riding by saying it was only a 50km 3-up (31 miles) it came as a shock to find out it was in reality a 37 mile course! As we wound up for the finish the even bigger shock was that the course turned out to to 38.6 miles. The last unplanned for mile was an absolute killer as we had all left everything on the road a mile back!

Overall though we rode really well as a team to clock 1:31:43 an average of 25.3 mph for almost 39 miles. It may have been a long way off the 31mph averaged by Team Shorter Rochford to win it, but still a great result.

Highlight of the event was probably the battle with Redbridge when they caught us at 28 miles. We re-passed them 3 times, and at one stage were side by side at 28 mph just battling to get passed. Given they had caught us from 3 minutes we were always going to lose in the horsepower stakes, but the battle was fun!

Dave Wentworth opted to ride on Saturday in the Shaftsbury 25 miler on the E2/25 - becasue he was too chicken to ride the National 3-up on Sunday morning. A real slog to reach the 12.5 mile turn in a exactly 35 minutes - very hard and very slow. A sub-hour ride looked out of the question at this stage, but the next 5 miles to Six Mile Bottom on the return were done in just 10 minutes and Dave started to think it might be possible. But then the thigh cramp set-in!!! Even a 25:22 for the second 12.5 miles wasn't enough for that sub-hour ride. Even tough Dave had caught several riders he was a tad disappointed with a 1:00:22. Never mild, always next week!!
Posted by dw-salesengine No comments: