In their first ride of the season Paul King and Steve Robinson took 1:52 off their course PB in the Hitchin Nomads 2-up 25 to record 1:04:46 and take second place.

It was a mild morning with a cross tailwind on the key part of the course which meant fast times all round. But the amount of time the pair took off their previous best shows that they are going into the season with really promising form.

Next up for Steve & Paul is the Icknield hilly in 2 weeks time, which will also see Sam Hayes in action as well.
Posted by Team Salesengine.co.uk No comments: 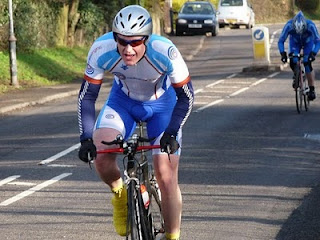 You can see from the look on Sam's face that when they call it "The North Road hardriders" they aren't joking!
Posted by Team Salesengine.co.uk No comments: