Saturday saw Dave Wentworth completing his final event of the 2009 season. A perfect day dawned for the event with a 3mph wind and, judging from the leg loosener ride on Friday, Dave should have been on a cracker. The first 5 miles - into what seemed like a 3mph gale - saw Dave average just 24mph, then at 6miles he suddenly got going and averaged just shy of 28mph for the last 4miles. All too late though and a 23:37 resulted at the end.
Posted by dw-salesengine No comments: 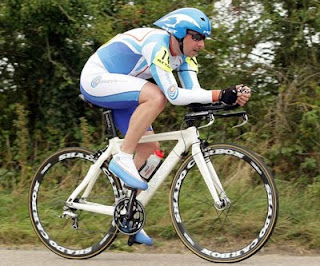 After a good but not outstanding season Steve Robinson pulled out possibly his best ride in Team Salesengine.co.uk colours to take 10th place in the Stevenage CC 12 mile time trial at Guilden Morden.

His time of 30:01 is his fastest ever on the quiet country lane circuit, and compared well to Richard Palmer's 27:58 (good enough for 4th spot) and David Ledgerton's 30:37.

Just the Blenheim time trial in 2 weeks time and then it is back to winter base miles in the big build up for 2010!
Picture above courtesy of Sarah brooke photography - www.sarahbrookephotography.co.uk
Posted by Team Salesengine.co.uk No comments:

After a couple of weeks off racing Dave Wentworth was back in action on Sunday morning in the Icknield 10mile event on the F1B/10 course at Tempsford. Good conditions should have seen a sub 23 minute ride from Dave, alas, he never really got going and never actually made it "hurt". A disappointing time of 23:33. Hey-ho, just one more event this year - the ECCA 10 miler on the E2/10 in two weeks time.
Posted by dw-salesengine No comments:

In the British Time Trial Championships Steve Robinson was representing team Sales Engine, and finished 108th in the Masters group with a 55:42 on the lumpy and rural Milton keynes based circuit.

Whilst it sounds impressive that he recorded a time 7 minutes faster than one Bradley Wiggins, the truth is that, as a senior not a Master, Brad had to ride 3 circuits instead of 2, so head to head would have beaten me by almost 15 minutes!

It was a fantastically well organised event on a nice testing course, and the chance to even compare times against an olympic gold medallist don't exactly come along too often so I'm well chuffed to have been able to ride.

Target for next year needs to be a top 100 result!
Posted by Team Salesengine.co.uk No comments: