After a number of super quick rides it was almost a matter of time before Martin Jones took the record of fastest ever 10 by a Team Salesengine rider.

On the 16th June Martin visited the K11/10T in the Midlands with his sights firmly set on putting the advice of Matt Bottrill, and all the weeks and months of hard work, to best use.

The previous best of 20:26, set by Phil Silver in 2014 was eclipsed by 5 seconds to take the new club record to 20:21, a simply stunning time for a course that doesn't usually get mentioned in the top 3 fastest courses in the country. This suggest there is still mote to come, but for now the team are simply celebrating such a stunning ride. Well done Martin!
Posted by Team Salesengine.co.uk No comments:

The team battle at the Tour of Cambridgeshire

After many years of racing up and down the open roads of Britain, the opportunity to compete in a fully closed road time trial complete with start ramp proved a huge draw for a number of the team.

At the inaugural Tour of Cambridgeshire Team Salesengine had representatives in a number of the age categories.

The best result for the team went to Martin Jones, who seemed almost immune to the 25 mph wind to blast round the hilly course in 38:18 which was quick enough for 47th out of the 533 finishers and saw him qualify for the amateur world championships later in the year.
Next up for the team was Hugo Hocknell, who showed that after months of illness he is getting back to his rapid best with 41:14. Frustratingly Hugo missed the Worlds qualification by just one place. 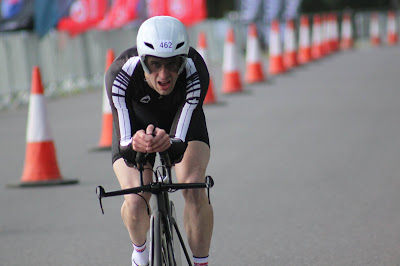 An agonising 4 seconds back from Hugo was Steve Robinson, who enjoyed one of his strongest races of the year to finish with 41:18 and a clear aim of worlds qualification in 2016.
Unlike Steve, Simon Doyle was having a slightly worse day than he was hoping for, which saw him slip behind Hugo and Steve for a change with his time of 42:21. After so many strong rides this year, it is just a blip, and will no doubt add fuel to the fire for faster rides later in the year.
Next up was David Ledgerton who clocked a strong 47:35. As we often see with David, he races himself into form, and as the season is progressing his tomes are getting ever more competitive, so we know there is still more to come.

The final member of the team was Roy Robinson who was doing battle in the 65-70 age group and again showed promising progress with an excellent time of 51:19, a good 2 plus minutes quicker than expected, and a time inside not just many in his age group, but a lot of much younger riders as well. Good showing Roy.

At round 4 of the season long Northampton & District series Martin Jones proved what a massive boost he is to the squad by taking 2nd place on the day, and bagging a maximum points score towards the individual and team prizes.

Due to roadworks the lumpy course had been shortened to 15.6 miles, which martin blitzed in 36:25, just missing out on the win thanks to a strong ride by Jon Simpkins of sponsored team Drag2zero.

In the team competition Martin was supported by Hugo Hocknell, who continue his battle back to fitness with a strong 18th place with 39:57, closely followed by another of our 2015 recruits, Stephen Franklin who came 24th with 41:43.

David Ledgerton scored some useful points in the overall competition by finishing 40th in 46:57 and Stuart Hocknell took a few scalps on his way to 50th place with 56:44.

These results leave Martin in a strong 4th place in the overall competition, and now looking to be a serious contender for the win, and the team head the team points series by a strong margin with 6 rounds to go.
Posted by Team Salesengine.co.uk No comments: