Time triallists tend to be a warm-blooded creatures by nature, so most won't be seen out and about racing until at least well into March and, if we're honest, the vast majority don't peak their heads out of their burrows until April.

But, new team member Nick Hickman is clearly no ordinary time triallist! Here we are barely into March and he has 4 TT's under his belt already and is flying.

2019 wasn't even a full day old and Nick was up and running. For his first ride in our team colours he smashed out a 23:33 at the CC Breckland New Year's day event to bag 15th place. The rest of us were nursing hangovers and avoiding the cold! 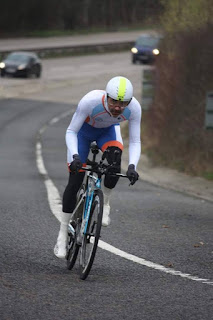 Then into February he took his next chance to battle the elements at the Ely & District hardriders - a 25 mile race that on paper seems easy enough due to the flat roads. But once you throw in howling winds across the fens, biting rain and some of the worst roads this side of Belgium Pave you have a proper hard-mans event on your hands. Showing what a great winter he's had, and choosing to make things even harder for himself by riding fixed (!), Nick took 3:29 off his previous PB to clock 1:18:10 for 38th overall.

It took a few weeks to thaw out before Nick was back in action again, this time at the Kettering CC hilly on the punishing NC1A course. Another strong showing bagged him his second top 20 of the season with a superb ride of 54:57.

Finally, on the 9th March Nick returned to racing at the Hitchin Nomads hilly 18.5, clocking 58:59 and no doubt being completely spun out on the long downhills as he was back on fixed again.

So welcome to the team Nick. It looks like the awards for hardiest racer, and rider with most events in a season both will soon be in the bag at this rate!
Posted by Team Salesengine.co.uk No comments: