Chris Hartley has a Hull of a good ride!

Over the last 2 seasons Chris Hartley has made the long journey to the V718 near Hull in search of a PB, only to be greeted by 20 mph plus winds.

Finally, in August Chris again made the journey and this time got 10-12 mph winds and warm temperatures which gave him hope of improving on his best time of 23:59.

Having worked hard across the season he managed to enjoy the fruits of his success by clocking a superb 23:05 to smash his previous best and make it all worthwhile.

In true time triallist spirit he was really pleased with his ride, and then almost immediately contemplating how he can now go sub 23 next year. Nice one Chris!
Posted by Team Salesengine.co.uk No comments: 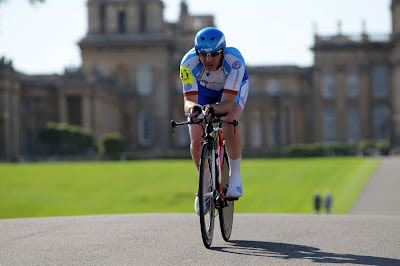 In a season blighted by rain and cold temperatures the team finally got some hot weather for this years Blenheim Palace closed road time 12.2 mile time trial.

Over 250 people took to the start line this year in what is rapidly becoming the biggest event on the cycling calendar. Sam Hayes had never raced at Blenheim before, and took to the course like a duck to water with a superb 31:32 for 54th place.

Every year this event gets bigger and more competitive, and there is no doubt the team will be back in force again next year. 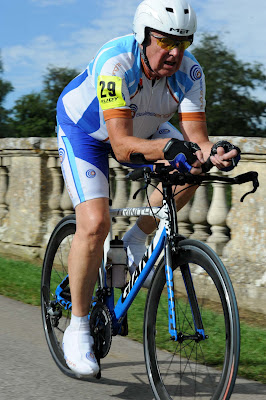 Paul King ticks off another PB at the Bournemouth 50

Having already smashed his 10 and 25 personal bests this season it left only one more challenge for Paul King of Team Salesengine.co.uk to conquer - the 50 miler.

With date clashes throughout the season Paul was left with just one chance to take his PB at the Bournemouth Jubilee Wheelers 50, knowing that it was far from the fastest course in the country.

But he went into the event with storming form, and put this to fantastic use by taking over 3 minutes off his previous best with a storming 2:07:11 which also bagged him 15th place overall. This makes Paul the first member of the team to update all his distance PB's in a single season. Top work PK!!
Posted by Team Salesengine.co.uk No comments:

Sam goes well under in the Finsbury Park 25

In a season disrupted by various annoying viruses and illnesses Sam Hayes proved that his underlying class and fitness hasn't deserted him when riding the Finsbury Park 25 on the F1.

Despite being the slower version of the course that heads north Sam managed to go well under the hour to clock 58:20. Although some way off his lifetime best it shows that all he needs is a good day and even with less than ideal preparation he can still go rapidly!!
Posted by Team Salesengine.co.uk No comments:

A hectic few weeks of racing has passed since the last blog update, and Hugo Hocknell has been heading the team in style at the Northampton and district series.

On the 30th June the team was out in force at the nc19 course with 7 riders taking part.

Really calm conditions greeted the riders for round 7 of the series on the N1/25. Hugo scored his second top ten of the series with 9th place being the reward for his 59:02. Steve Robinson scored his highest finish of the year with 21st place for his 1:03:32, and Stuart Hocknell just missed evens with his battling 1:17:23.

In the overall with three events left Hugo is up to 10th, and looking good for a top 5 by the end and Steve Robinson is 13th.
Posted by Team Salesengine.co.uk No comments: