After a winter of hard training for most of the team, March allowed several team members to open up the lungs in a number of time trials.

After a strong 2015 for 'the engine' the performance bar is set high but it looks like it is going to get raised again over the next few months.

But it's on the road where things count.

PB #1 for the year please stand up
Opening up the Team Salesengine.co.uk account in this year's open events was Steve 'Whiskers' Franklin. Looking to progress in his second year with the team, Steve took to the start line of the VTTA 10 event held on the O3/10 course. Steve came in with a top 40 placing, posting a time of 23.04. No doubt Steve will be breaking the 23 minute barrier this year, and with some regularity. Steve had the distinction of being the first TSE member to grace the road in our new, Champion Systems supplied kit. A PB by 28 seconds for Steve augurs well for him, and for our new kit.

While Steve was representing the team in the opens, Nigel Hale and Sam Hayes took the opportunity to stretch their legs on Hitchin Nomads CC's 25 mile club course. Sam and Nigel rode private time trials and delivered simply stunning early season 25 mile times on a very demanding and sporting course. Sam posted 1.00.06 and Nigel, in his inaugural ride, 1.00.27. Super impressive.

The following day, 13 March 2016, Steve Robinson and Simon Doyle returned to the scene of their 2015 Lea Valley CC victory. The E1/25b course near Newport, Essex is a rolling as it is idyllic. This year Doyle and Robinson were defeated by a fogged up helmet visor. Steve's new Lazer lid managed to microwave his head at 13 miles meaning that the duo rolled over the line in a time of 1.01.24 (for 4th place). 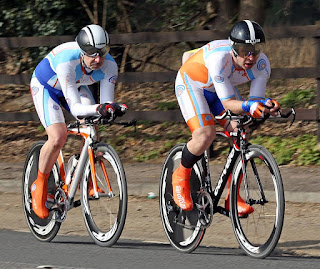 Steve Robinson (l) and Simon Doyle (r) sporting the old and new kits on their way out to the turn. Picture from Davey Jones.

ECCA 10
On Saturday 19 March, a strong TSE team competed in the ECCA E2/10 event. With the reigning National Time Trial Champion, Alex Dowsett (Movistar) taking to the start line, all eyes were on this race. Dowsett smashed out the fourth fastest 10 on record (17.46) to put a 2 minute gap between him and the fastest amateur. If you want to know, 12 seconds per mile seems to be the gap between the best pros and the best amateurs. Sam 'Bling' Hayes clocked his 2nd fastest time at the distance ever with a 9th place, 21.00.

Hot on Sam's heels were Hugo Hocknell (21.44) and Simon Doyle (21.52). Hugo and Simon were just on the cusp of top 20 placings. Not bad (understatement) for two of our riders who didn't always have the rub of the green last year. Hockers took 4th place in the A5 Rangers' hilly TT a week or so earlier, so it is evident that he has got some great early season form in his legs. Simon's time was his third fastest ever at the distance. Chris Hartley opened his account for the year with a robust 23.50.

Supporting the team and the ECCA were Steve Robinson and Rik Palmer in their capacity as marshals. TSE actively supports and promotes events and we were only too happy to provide supporting duties. Without marshals and volunteers events simply do not take place. Steve had posted a 1.05.19 for a rolling 25 miles earlier in the morning as a leg loosener as well. Chapeau Sir!