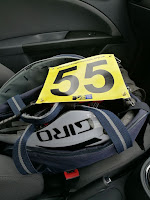 A clutch of riders were out sporting the TSE colours over the Bank Holiday weekend. Hitting the tarmac first (not literally), was Roy Robinson. Roy took part in the Sussex CA 10 on the G10/97 between Steyning and Shoreham. The course is based on the A283. In somewhat wintry temperatures of 2.5deg, Roy tapped out a 27.43, a 1.43 improvement on his N&DCA ride from last week.

Later in the day, Hugo Hocknell, Sam Hayes and Chris Rimes formed the TSE team in the Cambridge CC 10 miler on the F2 course near Cambourne. Hockers was once again the first rider off and clocked a time of 21.39. Sam Hayes posted a time of 21.42, he would have been ahead of Hockers had he not been held up at the turn (unlucky dude - watch out Hockers, Sam's on your case). Putting the icing on a strong team performance was Chris Rimes. Chris in his first month back racing recorded a 22.49.

Dave Wentworth was also in action on the Bossard Wheelers 10 (30 Apr 2017). As with Roy Robinson, Dave improved on his N&DCA Round 2 ride of last week. On what was described as a "big moan" day (due to the windy conditions), Dave recorded a time of 23.51. Not many riders had come back in sub-21 minute times at time of writing.

Round 2 of the 2017 N&DCA series pitted TSE riders against a very competitive field. This week's 10 miler, based on the roundabouts of Glatton, saw another bumper turnout of team riders.

Hugo Hocknell capitalised on his early start with a time of 24.01. That set the benchmark for the rest of "the engine". Steve Robinson was second in the pecking order. Even an enforced bike change could not damper his performance with a cracking time of 24.11.

Chris Rimes and Steve Franklin shared the same time of 24.22, both being slightly edged out by Simon Doyle (24.19). Steve is in a good spot of form and both Simon and Chris are getting back in to the groove of racing. 21 seconds separated 5 riders, this has no doubt set all riders off to the local bike shop to buy some additional speed...

New boy, Michael Watts punched the clock with 24.47 in his inaugural run for the team. Despite a frantic run up and down to the HQ and some fashion adjustments in his new skin suit, Michael demonstrated a lot of potential. He is going to be one to watch.

Ric Palmer clocked a PB in his first ride of the season. The comeback-kid (a big kid at that too) recorded a 25.34. Chapeau Ric.

Dave Wentworth notched a time that will contribute to the Masters' competition of 26.27. Roy Robinson rounded things off with a time of 29.13.
Posted by Simon No comments:

Round 1 - results
The season's first Northampton and District Cycling Association (N&DCA) time trial saw a number of Team Salesengine riders dust off the racing kit for this early season battle. Based on a very sporting (that means hilly) 18.7 circuit the race saw 8 riders commit to the start line. Sam Hayes was the quickest of the bunch with an impressive 44.51 that saw him sneak in to the top 20.

Best performances for the team went, by general consensus, to Steve Franklin (47.33) and Chris Rimes (47.23). Chris was making a welcome return to racing after a sabbatical. Steve was evidently capitalising on a strong winter. Chapeau chaps.

Round 2 - preview
Round 2 is based on a 10 mile "out and back" course and will take place on 22/04/2017. The event, hosted by Fenland Clarion sees another massive TSE turnout,

Newbie Mike Watts, Hugo Hocknell and Ric Palmer are due to make the series debuts and will be supported by Rimes, Frankin, Wentworth, Robinson x 2 and Doyle.
Posted by Simon No comments:

The annual Team Salesengine.co.uk 10 mile time trial drew a record number of entries. A field of 150 riders competed on the Cambourne based F2D/10 course in Cambridgeshire. TSE's new recruit Ryan Witchell set the bar for the day. Going off at the traditional "home team" #1 spot, Ryan recorded 20.54 for his inaugural ride with the team. A sign of things to come.

Ryan's time held until the seeded riders on "0"s started to come through the finish. William Wallace (CC London) took top spot for a while.  at least until Karl Willis (Herts Rouleurs) riding on #21 inserted himself on the top step. Ultimately though, the faster seeds, riding towards the back of the field, proved dominant. Stuart Travis (Team Bottrill/HSS Hire) shaded the day, ahead of Andy Jackson (SSLL Racing Team) and  Rob Young (Team Vision Racing Silverhook). Travis and Jackson both dipped under the 20 minute mark.

In the team competition it was Team Bottrill/HSS Hire who took the win. A gap of 1m 39s separated the winning trio of Stuart Travis, Max Sahota and Keith Dorling from second place Beds Road RT (Mick Hodson, Jason Green and Daniel Sibley).

As a small team the event places a significant stretch on our resources, we are however very happy to put something back in to the sport. Thanks is due to many people, not least our team principal, Steve Robinson and his family for pulling the lion's share of the event together. Thanks to our time-keepers (John Pick and Mike Bannister) and to the many volunteers from the team who marshalled with aplomb and hosted the HQ and provided the results. A full list of acknowledgements and results will be supplied with the results sheet (to include DNS and DNF information).

Thanks also to all riders who helped make the event a success by riding safely and working with us to make the HQ functions run smoothly.

The initial results were published at the end of the event yesterday -http://teamsalesengine.blogspot.co.uk/2017/04/tse-open-10-mile-tt-1-april-2017.html

Note - During the event a motorcyclist crashed near the course at approximately 4pm. There was no one else involved in the incident, the Cambridgeshire Police attended the scene and they worked with our organisers to keep the event running. We believe the motorcyclist was up and moving at the scene.
Posted by Simon No comments:

Subject to ratification, please see the provisional results from our event today. Thanks to everyone who took part and thanks for the generous contributions to the Stroke Association.

Full report to follow once we have eaten all the cake.