Four on tour in Hull 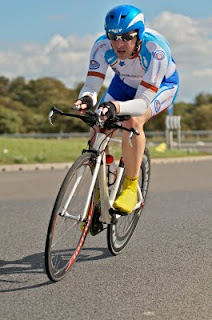 This season it would seem that if if an event has a Team Sales Engine rider in it then there is a high chance it will be glowing a gale!

Four of the team made the ludicrous 6 hour round trip this weekend to ride the Tem Swift 10 on the hallowed V718 just outside Hull. The course has always been talked of as one of the quickest in the country, and from the results of the day there is no doubt it is rapid.

Sam Hayes was the first rider from the team to race in the morning, overcoming the 20 mph winds to come back with a storming 22:22. Rik Palmer was up next and returned with a fantastic 23:02, followed by Steve Robinson who clocked his 2nd fastest 10 in the last 10 years with 23:35 and finally Paul King with 24:31.

Given the strength of the wind on the day it suggests that all four riders can re-set their PB's on the right day, so no doubt there will be more trips to Hull in 2012. 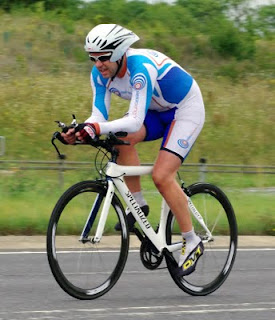 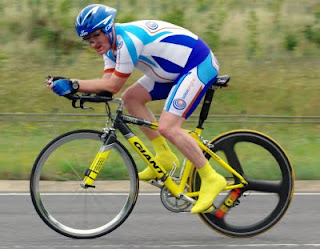 Rik Palmer, Chris Hartley and David Ledgerton were in action at the Chronos RT 10 on the F2 on Saturday. Conditions were good but not outstanding and Rik managed to clock his second fastest time of the year with 23:13. David and Chris both clocked a 25 something, but that is all the info we have at the moment.

PB for Steve at Blenheim Palace

Sunday morning saw Steve Robinson competing in his favourite event of the season around the grounds of Blenheim Palace.

The lumpy and completely traffic free course presents a pretty unique challenge as there are fast descents on narrow roads with a high number of riders on the circuit placing an emphasis on bike handling as well as pure speed.

On the day Steve took advantage of the good conditions to take 21 seconds off his previous best time to record 33:43 for the 12.3 miles to finish 62nd out of the 165 competitors.

Victoria CC series - Salesengine have 3 in the top 10!

After three of the four rounds of the Victoria CC10.2 series on the E1 Team Salesengine have more riders in the top ten than any other team.

With one round to go Rik Palmer is in 5th place, Paul King is 7th and Steve Robinson is 9th.

All three will miss the final round at the end of August due to being in action at the Team Swift Charity event in Hull, but should all still be able to finish in the top fifteen overall. After the team win in the second round of the series it has been one of the best events for the team this year.

July results - so many top rides!

It's been a crazy month with members of the team racing all over the South East racking up some strong results. The wind has still been consistently strong so those PB days haven't quite arrived, but the palcings have been good.

On the 9th July Rik Palmer and Dave Wentworth competed in the Beds Road CC 10 on the F1. It wasn't the best of days but Rik grabbed a superb 19th place with 23:29 closely followed by Dave who recorded 24:00 to get into the top 30.

Rik and Dave returned to the F1 for the Hitchin Nomads CC 10. Rik went slightly quicker than earlier in the month with 23:25 for 20th place while Dave slipped back slightly to 24:19 to finish 33rd.

At the end of the month we had five riders in action at the third round of the Victoria CC 10.2 on the E1. On the best day of the three so far Rik Palmer was again the teams quickest rider with 24:48 for 20th place. Ride of the day goes to Paul King who was just 12 seconds behind Rik to take 22nd spot. Steve Robinson was next with 25:38, David Ledgerton clocked 26:57 and Chris Parkes enjoyed his first outing on the tough course with 27:41.