Hugo leads the team at the Chronos RT 10

When the wind is blowing at around 20 mph the F2 outside Cambridge is one of the last courses you want to be on. It may have a super smooth surface, but it is very exposed which impacts on the times.

None of this seemed to slow Hugo Hocknell though who blasted round in 22:00 to take 16th place in the field of 88. 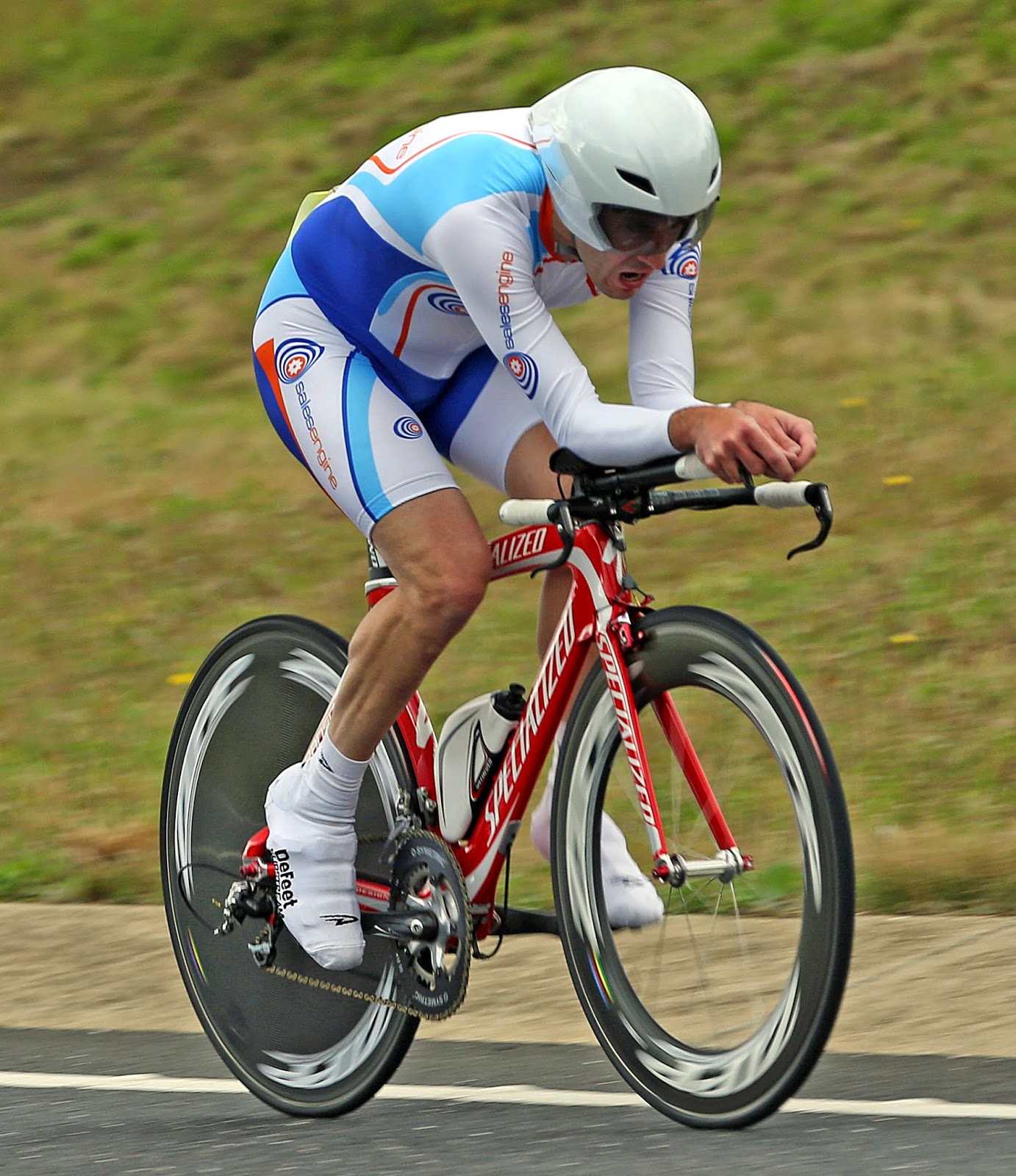 Next up for the team was David Ledgerton, celebrating finally being able to string some races together after an injury hit season with an excellent 25:41. Stuart Hocknell was next up, riding strongly in the tough conditions to clock 30:41.
Posted by Team Salesengine.co.uk No comments:

Having survived their soaking on the F12, Steve Robinson and Ben Robinson were back in action on the evening of Tuesday 12th for the Bicester Millennium airfield 10.

A strong wind was blowing across the airfield, and in the 2.5 mile lap there was over a mile directly into the teeth of it which took the edge off the times.

Despite this the duo still managed to take 1 whole second off their PB to finish in 26:07 and take 2nd place out of the 5 tandems on the day. 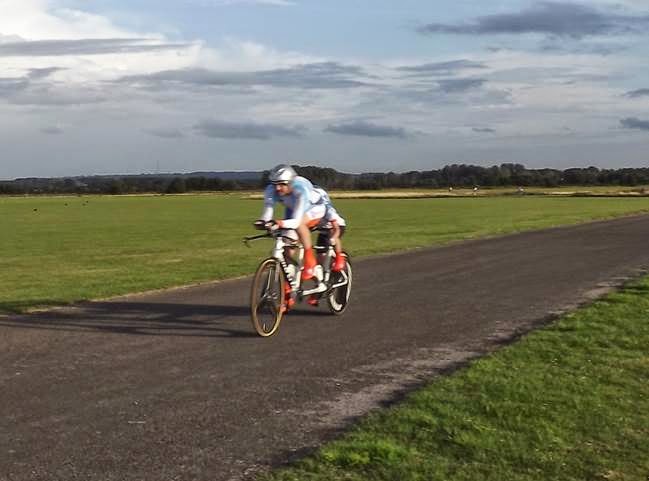 Sam smashes his lifetime PB on the E2

After going close to a lifetime best and a sub 21 minute ride several times Sam Hayes was beginning to wonder whether that 20 minute ride was ever going to happen, despite assurances from many in the team that he had the form and simply needed the day.

On Saturday as Sam lined up for the start of the ECCA 10 it has to be said that it didn't look like the perfect day for a PB, but a superb ride saw him take 26 seconds from his previous best time to clock 20:41 and take 7th place overall. We're not sure if even 4 days later he has stopped grinning !

Usually Hugo Hocknell would be battling with Sam for the hour of fastest from the team, but a midweek illness took its toll and he was a bit short of that final top end speed on the day. That said, a 21:23 and 21st place was still an excellent result.

Chris Hartley was the third counter for the team, with a sub 24 minute ride (23:58) and Stuart Hocknell went agonisingly close to breaking the 20 mph barrier with his 30:03, whjch ranks as his 3rd quickest time at the distance this year.
Posted by Team Salesengine.co.uk No comments:

Ben Robinson makes his tandem debut - and bags a win

Youngest member of the Sales Engine team Ben Robinson made his racing debut in possibly the wettest conditions of the season at the Leighton Buzzard 10 on Saturday.

Paired with his dad Steve, the duo battled against the torrential rain to clock 26:08 to win the event by 55 seconds. It was a great start to what will hopefully be a flourishing racing career!

Dave Wentworth does a short 23 at the Whitewebbs CC 10

The F20/10 at Hoddesdon has been steadily building a reputation as one of the fastest courses in the country, and has helped Phil Silver deliver a storming mid 20 minute 10 already this year, so Dave Wentworth travelled to it with high hopes.

Unfortunately for Dave, like a number of roads in our region the A10 has recently been re-surfaced which has taken the edge off the times and made some sections more of a slog than they were.

This was reflected in the times at the Whitewebbs CC 10 where it seemed it was quick, but no long lightning fast. On the day Dave rode well to record 23:07, a bit outside what he had hoped for, but a great result given the new conditions for the course.
Posted by Team Salesengine.co.uk No comments:

Steve Robinson get back into the 21s at the VTTA

A gap of 19 years separated Steve Robinson's last 2 rides of less than 22 minutes for 10 miles.  After a strong winter and a lot of quality racing Steve knew that all he needed was a good day and a fast course and a quick time was on the cards.

On the day the wind was stronger than hoped, but warm and dry conditions and the fact that the F11 at Tring is known to be one of the quickest courses in the country promised a good time.

As it turned out this was the case and Steve knocked 21 seconds off his fastest time of this century to record 21:45. Next in his sights is his lifetime best of 21:18 set all the way back in 1995.
Posted by Team Salesengine.co.uk No comments:

Sam and Steve take the win at round 2 of the Victoria CC 10.2

After narrowly missing out on the win in round one of the Victoria CC 10.2 mile team time trial in June, Steve Robinson and Sam Hayes went one better in round 2 to take the prize on the day and take the lead in the overall series.

Their time of 23:39 was a fraction down on their round one time, but gave them the win by 37 seconds from a battling Finchley Road team.

With 2 rounds left the duo lead the standings in the 2-up section, but with their rivals from round one back in action in round 3 they face a battle to win the overall. 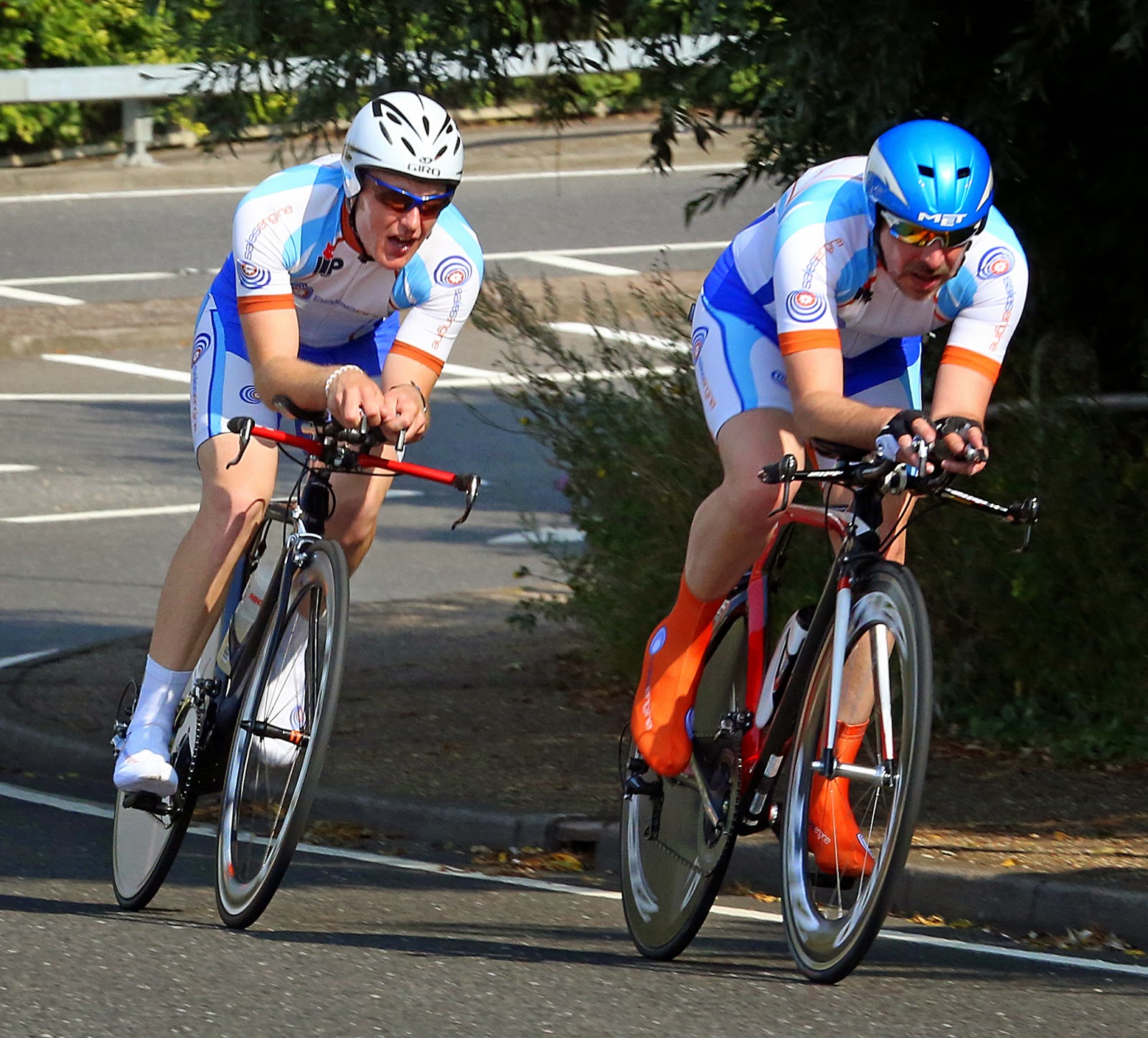 After their victorious performance in round 6 the team went into round 7 of the Northampton & District eerie with high hopes, but narrowly missed out on the team prize by just 11 seconds and had to settle for second.

As in round 7 Sam Hayes lead the team home with an excellent 22:57 for 9th place, but he was pushed all the way by Hugo Hocknell who was just 6 seconds behind to finish in 11th. Simon Doyle was again part of the team prize, with his ride of 24:00 edging out his long-time team rival Steve Robinson who clocked 24:22.

Lyndon Lewis showed that his form is coming now he is back to regular racing by recording 28:34 around the lumpy circuit to finish in 37th and Stuart Hocknell finished comfortably in the top 50 with 33:26.

With three rounds to go the team now stand in 2nd place in the overall team standings, so a big push could see them lift the trophy at the end of the year.
Posted by Team Salesengine.co.uk No comments:


Simon Doyle and Phil Silver travelled down to Bentley in Oxfordshire for the Hounslow and District 25 with a view to coming away with some quick times.

Unfortunately for Phil an early puncture put paid to his efforts, but Simon avoided the bad luck and blasted round the course to record an excellent time of 57:42.

In his first season with the team this time already puts Simon as the 4th fastest member of the team at the distance, and with his ever improving form there is more to come for sure. Phil will be back to fight another day...
Posted by Team Salesengine.co.uk No comments:

A strong team performance at round 6 of the N&DCA series saw Team Salesengine taking the team honours against some quality opposition.

Leading the team home, and taking a superb 5th place overall was Sam Hayes who clocked a time of 49:31.  Next up was Simon Doyle who showed what a great addition he has been to the squad by clocking 51:50 for 13th on the day. The last of the three counting members for the team prize was Steve Robinson who recorded 53:14.

A strong ride of 1:02:33 saw Lyndon Lewis take 33rd place and Stuart Hocknell finished in 38th with 1:08:32.
Posted by Team Salesengine.co.uk No comments:

Hugo takes a top 10 in the Fenland Clarion 25

Hugo Hocknell showed that his form is as strong as ever with a superb performance in the Fenland Clarion 25 to take 8th place in a competitive field with a time of 58:45.

Hugo was backed up on the day by his Dad Stuart he finished in 40th place with 1:19:15.
Posted by Team Salesengine.co.uk No comments: