Sam takes 14th in opening round of N&DCA and goes under the next day..

Saturday the 16th April was the opening round of the Northampton & District series, and although not feeling like he was on best form Sam Hayes still managed to take 14th place and gain a very handy 89 points for the season long competition. Sam clocked 48:22 on the 20 mile hilly country lane course.

Steve Robinson suffered his first bad ride of the season in the same event to finish in 53:55 for a very disappointing 47th place, his lowest placing in an N&DCA event.

Despite his hard ride on Saturday Sam then went on to race again on the F1 25 mile course on Sunday. His finishing time of 59:05 may not have been as good as he hoped, but shows that even on his bad days he can still post decent times!
Posted by Team Salesengine.co.uk No comments: 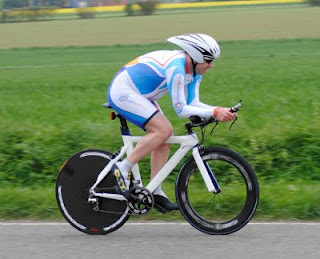 In his opening race of the season Rik Palmer stormed round the E91/10 in 24:34 to take 13th place in a competitive field. It's a cracking start to the year and signs that a good winters training will pay dividends.
Posted by Team Salesengine.co.uk No comments:

This weekend saw 2 members of the team out battling in Cambridgeshire and Bedfordshire. On Saturday afternoon Sam Hayes opened his 25 mile account for the season with a rapid 57:14 on the E2. Although not as quick as he had hoped thanks to a rising tailwind it still ranks as the fastest ever 25 by a Team Salesengine rider, and its only a matter of time before both Sam and Rik Palmer slice more time off it. On Sunday morning Steve Robinson competed in an Interclub 10 representing his second claim club Hitchin Nomads. On a calm morning Steve clocked 24:36 on the lightly trafficked single carriageway course to take 24 seconds off his PB and take 13th place overall.
Posted by Team Salesengine.co.uk No comments:

The early season form of continues to look promising with Team Salesengine taking 3rd placed team in the Icknield hilly 30k.
Sam Hayes led the team home with a storming 46:32 to take 13th place in the high quality field. Steve Robinson finished in a course PB of 50:24 to take 24th place and Paul King was hard on his heels with 52:03 for 33rd.
The same three are in action again in 2 weeks time at the first round of the Northants & District series, with Sam on the E2 before that looking to further hone his speed.
Posted by Team Salesengine.co.uk No comments: