Saturday morning saw the team return in numbers to round 2 of one of the friendliest and best organised series events of the season; the Victoria CC 10.2 mile time trial just outside Saffron Walden.

Rain and a hard headwind on the climbs back from the turn greeted our six riders, but none of this put off Hugo Hocknell who stormed to 5th place with a course PB 23:51.
﻿﻿﻿ Also clocking a course PB, and taking honours of second fastest for the team, was Steve Robinson who finished in 25:28 to take 17th place. After 2 rounds Hugo is holding 2nd place overall in the series and Steve is in 5th place.﻿ Third counter for the team was Rik Plamer who improved substantially on his May ride to record 26:19 for 23rd on the day.  Rik now stands in 9th place in the series. As in the May event, the team came within a handful of seconds of taking the team prize, this time being edged out by Chelmer CC by just 23 seconds.
﻿ David Ledgerton was next up for the team with 28:38, closely followed by Roy Robinson who debuted on the course with 30:51 and Stuart Hocknell who came home in 33:22.

Sam storms to 5th place in the N&DCA

Saturday afternoon saw Sam Hayes put in his ride of the season to take 5th place overall at round 5 of the Northampton and District Association 15.

A strong headwind to the turn and intermittent rain made for hard conditions for all of the team, but Sam blasted though in just 34:42 to bag 98 points in the series competition and take his highest placing of the year.
The friendly battles between the other team mates also continued, with Stephen Mavin pipping Hugo Hocknell for the first time this year, and taking 10th place overall. Mav clocked 35:31 to Hugo's 35:39 which was still good enough for 11th and will keep him in the hunt for a top 5 finish in the series.
Steve Robinson took the third placed spot for the team, and despite the poor conditions also shaved 10 seconds from his previous course personal best with 37:20 which was good enough for 21st place.
Paul King was the final member of the team in action, and finished hard on Steve's heels with his 37:25 which saw him finish in 24th place from the 70 man field.
Round 6 of the competition is just 2 weeks away, and with performances on this level we should be able to get 5 riders in the top 20 of the overall by the end of the season.

Chris overcomes the conditions for great time on the E2

Almost biblical conditions greeted Chris Hartley and Dave Wentworth when they arrived for the Shaftesbury CC 25 on the E2/25 on Saturday with high winds and rain lashing down.

Unperturbed by the conditions Chris Hartley put in his strongest performance of the year to come home in 1:01:44 to take 28th place from the 60 people who were hardy enough to both start and finish. A cracking ride and a sure sign that after a quiet start to the year Chris is really finding his racing legs.

Hopefully the pair will have finished drying out now ready for their next event!
Posted by Team Salesengine.co.uk No comments:

6 members of the team were in action on Saturday at the fourth round of the ultra competitive Northampton & District series. This time they were battling 2 laps of a lumpy circuit for a total of 20.8 miles.

First home for the team and into the top ten again in a superb 9th place was Hugo Hocknell with 49:03, a ride good enough to put him in 4th place in the overall competition. Closely behind (as ever!) was Stephen Mavin who finished 12th in 49:38 and has leapt up to 7th in the overall.

Paul King put in another really strong ride for a course PB 51:56 to take 24th spot on the day and climb to 15th in the series.

There was another inter-team battle between David Ledgerton and Lyndon lewis with David taking 49th spot in 59:36 from Lyndon in 50th in 1:01:02with the pair followed by Stuart Hocknell in 1:07:46.

The next round is the 15 mile in mid June when another strong turnout should see the team pushing to get more riders into the top 20.
Posted by Team Salesengine.co.uk No comments:

Roy Robinson was in action again this weekend at the Hitchin Nomads 25 on the testing Guilden Morden country lane circuit. As a regular visitor to the course over the last few years Roy has been getting steadily quicker each year and improved again this year by over a minute to record a strong 1:13:01.

This is yet more proof that his consistent training and more regular racing is paying dividends as he now regularly smashes the 20 mph barrier.
Posted by Team Salesengine.co.uk No comments:

Sam and Steve get their 19 at the ECCA championships!

After a few attempts and a lot of hard training Sam Hayes and Steve Robinson finally cracked the magic 30 mph mark for 10 miles with a storming ride of 19:53 at the ECCA tandem championships on Saturday.

Although it wasn't a perfect day the pair rode out of their skins to dip under, despite losing almost 10 seconds at the one turn when they were stopped by traffic. Their time was good enough for third place overall, just 26 seconds behind the winning team of John Iszatt and Dean Lubin. 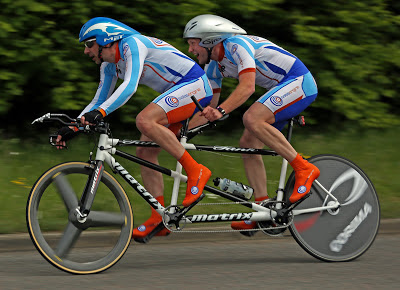 More photos from the Victoria CC courtesy of Davey Jones 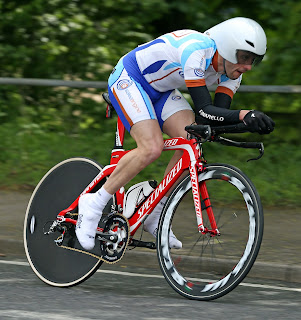 Hugo in full flight on his way to 7th place. 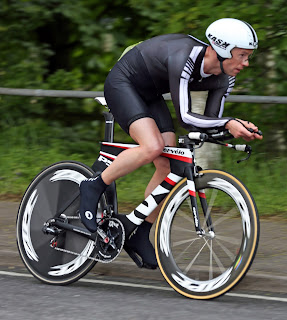 Mav rocking his new look P5 also on his way to 7th place! 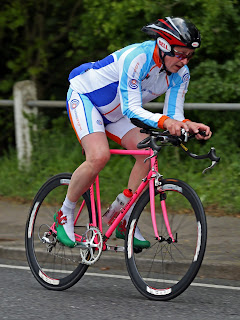