Saturday morning saw 6 members of the team in action at the Victoria CC 10.2 mile TT near Saffron Walden. The course drops steadily to the turn and there was a niggling headwind on the way out which took the edge off the times.

In the last 2 events there has been only 4 seconds and then 5 seconds between Hugo Hocknell and Stephen Mavin, so we were expecting a close battle again, but this time there was nothing to split the pair with them both coming home in 23:54 which got them joint 6th place.

Steve Robinson was the third counter of the team for the team prize, but after struggling with a cold all week he was below par and his 25:44 means that the combined time was just behind that of East London Velo who took the team honours. His time was still good enough for 17th place overall. 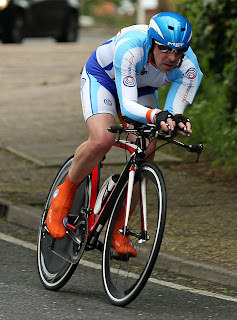 After almost 2 years away from racing Rik Palmer was back in action, and was forced to resort to a road bike with no tri-bars after mechanical problems on his low profile. This didn't slow Rik down much though and he still recorded an excellent 27:05 and had a massive smile on his face afterwards which was great to see. 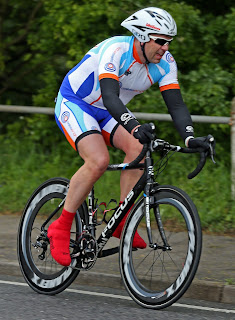 Next up for the team was David Ledgerton with a great ride of 28:05 followed closely behind by Lyndon Lewis who showed sterling commitment to his job by taking a work phone call just before leaving for the start and incurred a 30 second late start penalty, and came home in an excellent 30:30. It was a top ride by Lyndon and we just hope his boss appreciates his commitment!

Another top ten for Hugo

Hugo Hocknell added another top ten to his seasons palmares with a great ride in the Peterborough CC 10 on the N1/10 on the 18th May.

Up against a class field that included Michael Hutchinson, the current National 10 champion, Hugo came home in 23:16 to take 9th place overall. The N1 is not the quickest of courses due to the sheer volume of roundabouts to be negotiated, so this was another excellent result for Hugo.
Posted by Team Salesengine.co.uk No comments:

David and Dave put in strong rides at the Lampard 10

Saturday the 18th saw Dave Wentworth and David Legderton in action at the Lampard RC 10 on the F12 near Leighton Buzzard. The F12 is a notoriously difficult course to get a good time on, despite being pretty flat the road surface always seems to take the edge off the times.

On the day Dave Wentworth rode superbly to finish in a fine 11th place with 23:42. David Ledgerton continued to show the signs of his ever improving form to come home in 27th place with 26:42.
Posted by Team Salesengine.co.uk No comments:

Round 3 of the N&DCA - all getting tight within the team..

Saturday afternoon saw Team Salesengine in action at the third round of the N&DCA with eight members of the team competing for bragging rights.

Sam Hayes rode superbly to claim the honour of fastest team member with a strong 24:22 to take 13th place on the day. Hugo Hocknell was next up with 24:40 to again narrowly edge out Stephen Mavin who was an agonizing 4 seconds further back. This is the second ride in a row that Hugo has edged this battle by just a few seconds.

In a change of recent form Steve Robinson (25:30) managed to edge out Paul King (25:50) and take 49 seconds off his course PB despite the hard conditions dragging back from the 5 miles turn.

David Ledgerton was next up with a battling 30:00 to squeeze ahead of Lyndon Lewis on 30:27 and Stuart Hocknell recorded 35:08.

In the series results it looks like Hugo will have cemented his 5th place overall while Mav has climbed into the top ten as well. There is still a long way to go, but on the form the team are showing it is possible we could occupy 5 of the top 20 places by the end of the season!
Posted by Team Salesengine.co.uk No comments:

Battling the elements at the Bossard 10

After the warm weather and light winds of the Bank Holiday the team faced very different conditions at the Bossard Wheelers 10 with almost 20 mph winds and torrential rain at times.

With a lot of the gang across at round 3 of the Northampton & District it was down to Chris Hartley, Dave Wentworth and Roy Robinson to do the business.

Chris and Dave were on the tandem for the first time this year and came home in a strong 23:53, which bodes well for their main tandem targets still to come.

In the Longmarkers event Roy rode strongly to clock 28:14 for 5th place overall. This was a good minute plus faster than he acheived on this course last year in better conditions, so acts as yet more proof of his improving form.

No doubt the three are still drying out....
Posted by Team Salesengine.co.uk No comments:

To conclude what has been a simply stunning week for the team Steve and Roy Robinson became the 4th and 5th members of the team to update one of their personal bests in the VTTA 10 on the F11 on Wednesday.

Taking to the startline it didn't look too promising with the threat of rain and a blustery wind of between 15 and 20mph, but crucially it was from the south west which seems to keep this course running quickly.

Roy was the first back with a cracking time of 25:44 to take 1:01 off his fastest time for the last ten years. A few months of consistent training is clearly beginning to pay off for Roy, and he is getting quicker year on year which is great to see.

Dave Wentworth was next in, but was clearly feeling some lag from his Monday ride as he slipped back to a still quick 22:25.

Steve Robinson was third member of the squad home, coming over the line in 22:12 to improve on his Last three seasons PB by 45 seconds. This in fact is Steve's fastest 10 since 1997, so it shows that being a vet isn't slowing him down too much yet!
Posted by Team Salesengine.co.uk No comments:

Bank Holiday Monday for once came with warm and dry conditions and almost no wind, the perfect day to be time trialing on one of the quickest (and bumpiest!) courses in the country - The F11 near Tring.

Sam Hayes and Dave Wentworth both took to the start line aware that they had a great opportunity for a quick time, and both took full advantage with superb rides.

First home was Sam in a brilliant 21:07 to match his lifetime PB to the second, and give him his fastest time in years. It also puts him within 7 seconds of the fastest solo time recorded by a member of Team SalesEngine. Not bad for a first ride on this tricky course.

Not far behind him was Dave Wentworth, who is 23 years Sam's senior but barely any slower! Dave recorded his first ever sub 22 minute ride with a stunning 21:59 to lop a further 13 seconds from his PB set on the same course last year.

Cracking rides from the pair, and well deserved after a lot of hard training over the last few months chaps.

Hugo Hocknell continued to show his ever improving form on Sunday by taking 20 seconds off his previous best 25 mile time with 55:27 in the Welsh Natiional championships.

The superb ride was good enough for 59th place in a really high quality field, and keeps Hugo at the top ff the leaderboard for fastest member of the squad over 25 miles. Top ride sir!
Posted by Team Salesengine.co.uk No comments:

The Saturday bank holiday saw Steve Robinson and Sam hayes in action on the tandem again, this time at the Cambridge CC 10 on the A428 near Cambourne.

A rising wind and rain ruined their chances of a fast time, but the pair still managed to win the event with a strong ride of 21:27.

In the solo event Chris Hartley led the team home with a strong 25:03, with Stuart Hocknell edging closer to the magic 30 minute barrier with 32:10. On a calmer day there is no doubt he will get back under evens.

Lyndon Lewis was also in action, but a late start led to an official time of 48 minutes, but it is all good training which will no doubt help him challenge the other members of the team in the next few events. 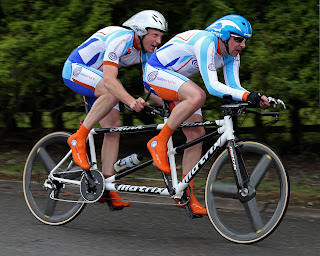 The second round of the Northampton & District series saw Team Salesengine newbie Stephen Mavin get within a whisker of beating Hugo Hocknell for the honour of fastest team member on the day.

Hugo rode strongly to finish in a fantastic 15th place with 23:43, with Stephen just 3 seconds back and in 17th place. In just his second open time trial this is a great result for Stephen. These strong results place Hugo in 6th place in the overall with Mav just outside the top ten for now with 11th place.

A bit further back in the field there was another close battle between the old rivals of the team, Paul King and Steve Robinson. Paul King continued his strong form with an excellent 24:45, with Steve closing in on him compared to round one with 25:02. Paul is now in 19th place overall and Steve in 26th.

Also in action was Stuart Hocknell who didn't enjoy the long drag into the headwind to the turn but flew back to the finish and recorded 32:42.
Posted by Team Salesengine.co.uk No comments: